I’m not one for New Year’s resolutions, but I’ve seen people have been sharing a lot of really exciting and positive ideas for 2019. Fantastic. Let’s get out there and renew our commitment to get out there and follow our paths, both professionally and personally.

But… I’m a grumpy not-so-old old man and I think there’s been a little too much positivity. Let me share my favourite bit of misguided positivity:

“Don’t bring me problems, bring me solutions” or “Fight the urge to complain unless you have a solution”.

On the surface this sounds great, empowering even, but, as we’ll see, this isn’t a great idea.

That’s what Bob Ebeling told his wife, after getting back from work that night. Bob was an engineer working for a NASA contractor on the STS-51-L project. Bob was also concerned. There was a problem with a mechanical component called an ‘O-ring’. STS-51-L was ready to launch the next day, but he felt that in the cold January Temperatures these O-rings were likely to fail.

He and four of his colleagues had been trying very hard to convince management that it was not safe to launch. They had no fix, solution or remedy, but they had seen a problem and felt a duty to let people know and stop the launch. By that night, they had already been over-ruled. The next morning the launch was going to happen.

The next day America mourned the death of the seven astronauts on board the space shuttle Challenger. Sitting stunned in a conference room in Utah, Bob and his colleagues knew in that moment exactly what had gone wrong. 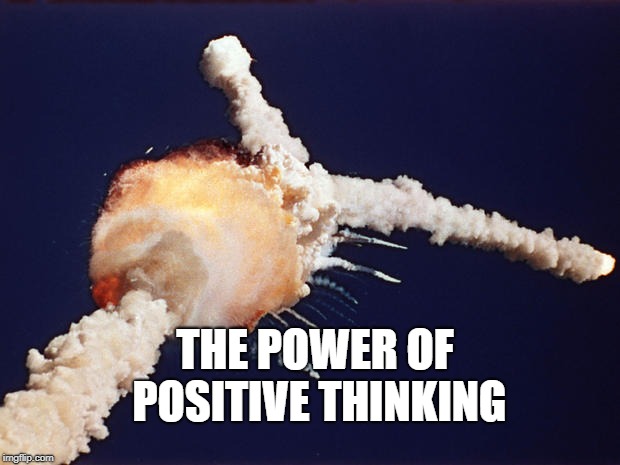 We don’t do ourselves any favours by silencing the Bob Ebelings of our organisations with our ‘positivity’.

Luckily most of us work with lower stakes. But there is danger in this misguided solution-only mindset and there is waste when we ignore opportunities just because the detection of the problem and the creation of a solution aren’t co-located.

So, here’s to all our New Year’s resolutions. But more importantly, here’s to another year of building a work culture where it is safe and encouraged to flag issues, even if you don’t have the solution.